Jonathan Lovekin has long been researching abandoned spaces through photography. This is no surprise from a man who finds the films of Tarkovsky ‘comforting’. His body of work might be understood as a taxonomy of slow decline.

The twelve photographs exhibited here together contrive to become a study of entropy. They depict spaces in different states of abandonment. Some are hanging on to life and some have reached a state of ruination. There is also evident a real concern with the disintegration of outmoded industries that depend on what are now thought of as low technologies. 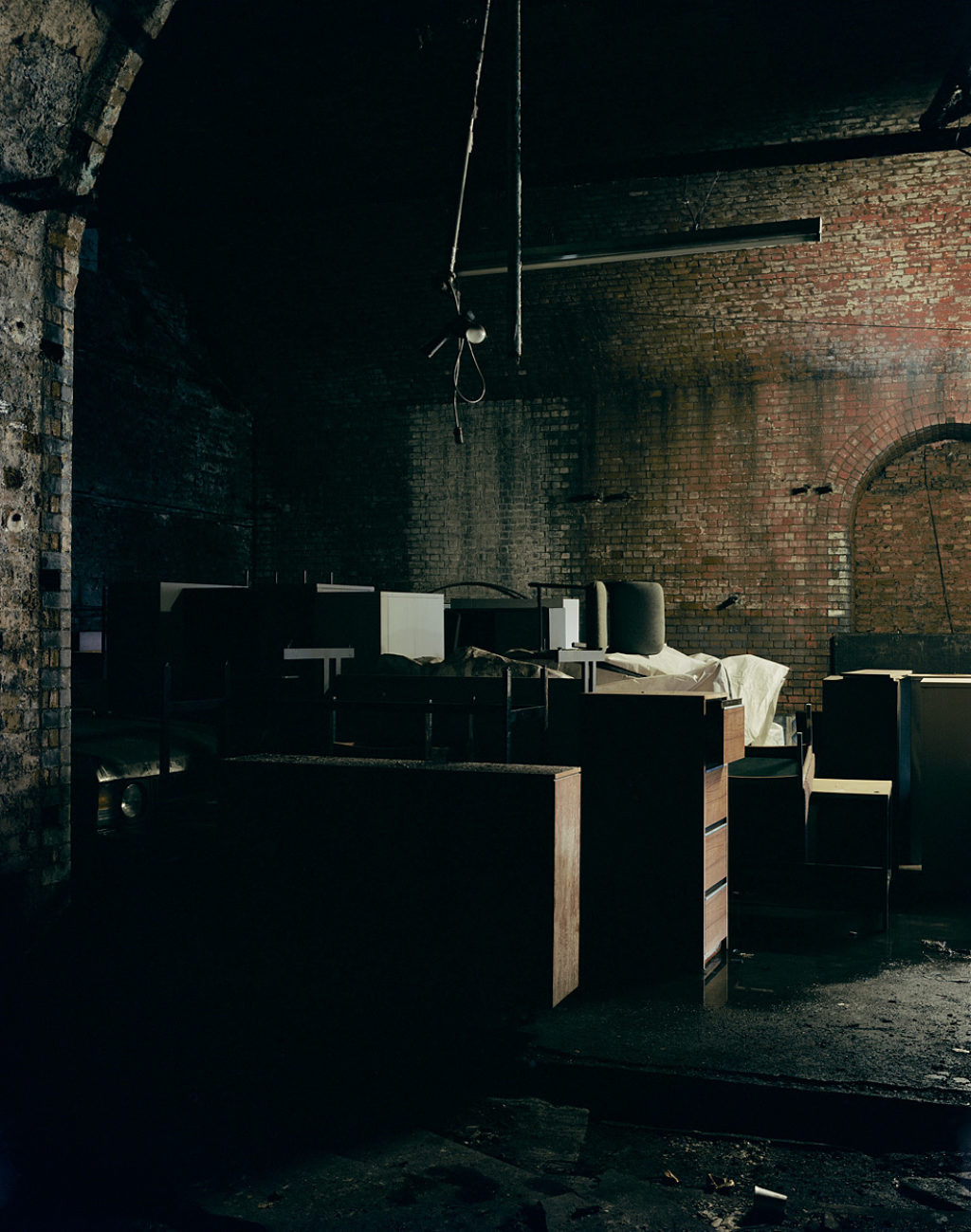 The earliest photographs shown in this exhibition are of found spaces at the edge of the City of London. The first, from 1999, depicts a space under the Bishopsgate Goods Yard, an infrastructural node that was formerly a destination for materials and foodstuffs brought to the city by train. Office furniture is arrayed in a haphazard manner under weighty brick arches. Partially cast in shadow, their form is revealed by an unseen natural light source. This banal scene, under Lovekin’s gaze, takes on a quasi-religious quality. The depiction of discarded electrical equipment in CO2 adopts a similar attitude to contrast and hue, but employs a different spatial register that provokes a greater sense of claustrophobia. 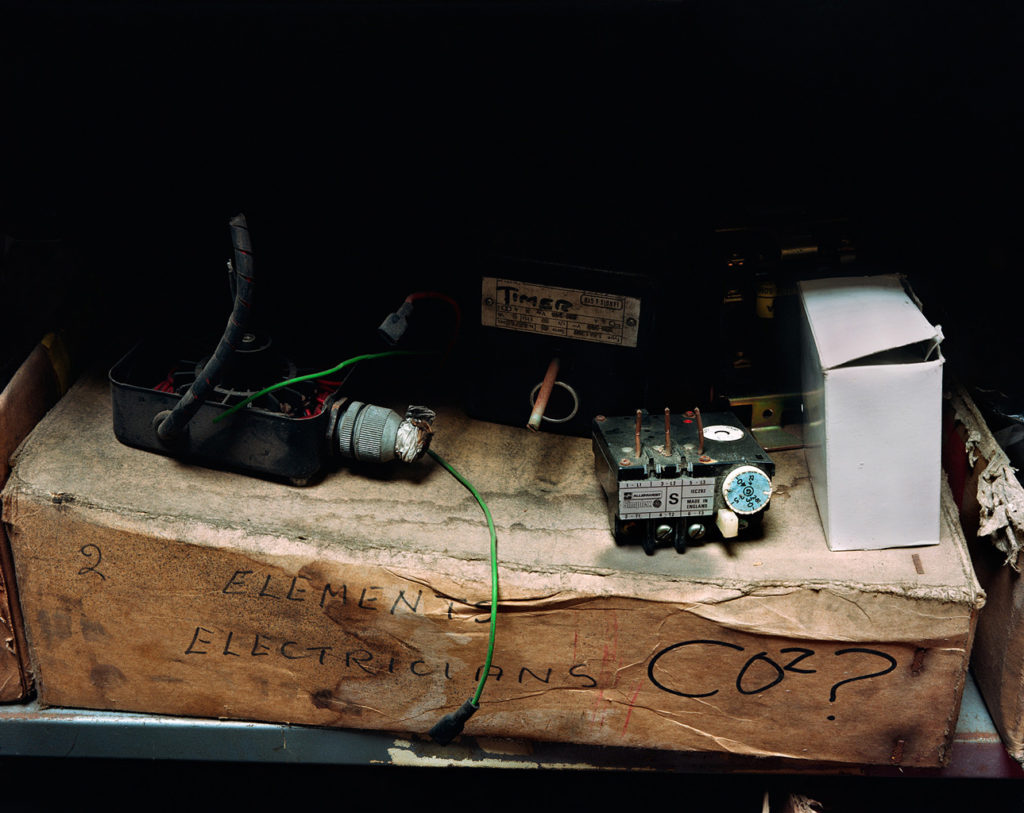 Lovekin pursues similar subject matter and pictorial devices in his more recent photographs of workspaces discovered in Yeongdeungpo-gu in Seoul. Here the colour palette shifts from ochres and reds to blues and greens. Though the spaces are intricately even chaotically arranged, there is an order evident, achieved through the alignment of objects within the frame. The eye is invited to roam over the detail of these intimate interiors – we can appreciate the plasticity of the objects contained within. Aside from the machines used for polishing and buffing, punching, forming, cutting and trimming, we see displayed the accumulation of an assortment of workshop paraphernalia – a cardboard box that previously accommodated Californian wine bottles, clocks, calendars and newspapers – we understand their place in the picture. Lovekin has resolved the pictorial space. 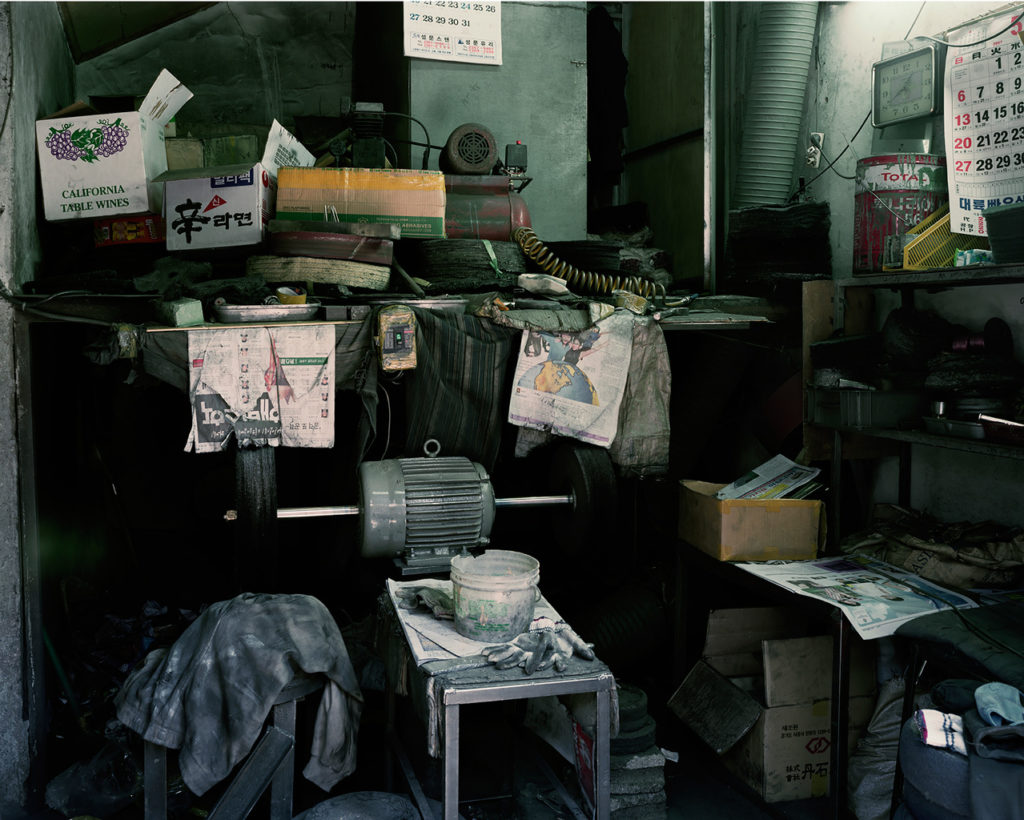 These photographs represent a moment of change. The economic pressure applied by the expansion of the commercial city has pushed or will push the last remnants of manufacture to peripheral sites. It is not only the analogue processes and cottage industries that give life to the city that are displaced. The adjacent stalls selling food, sex and replacement limbs (a reminder to young apprentices of the likelihood of industrial accidents) will also disappear. 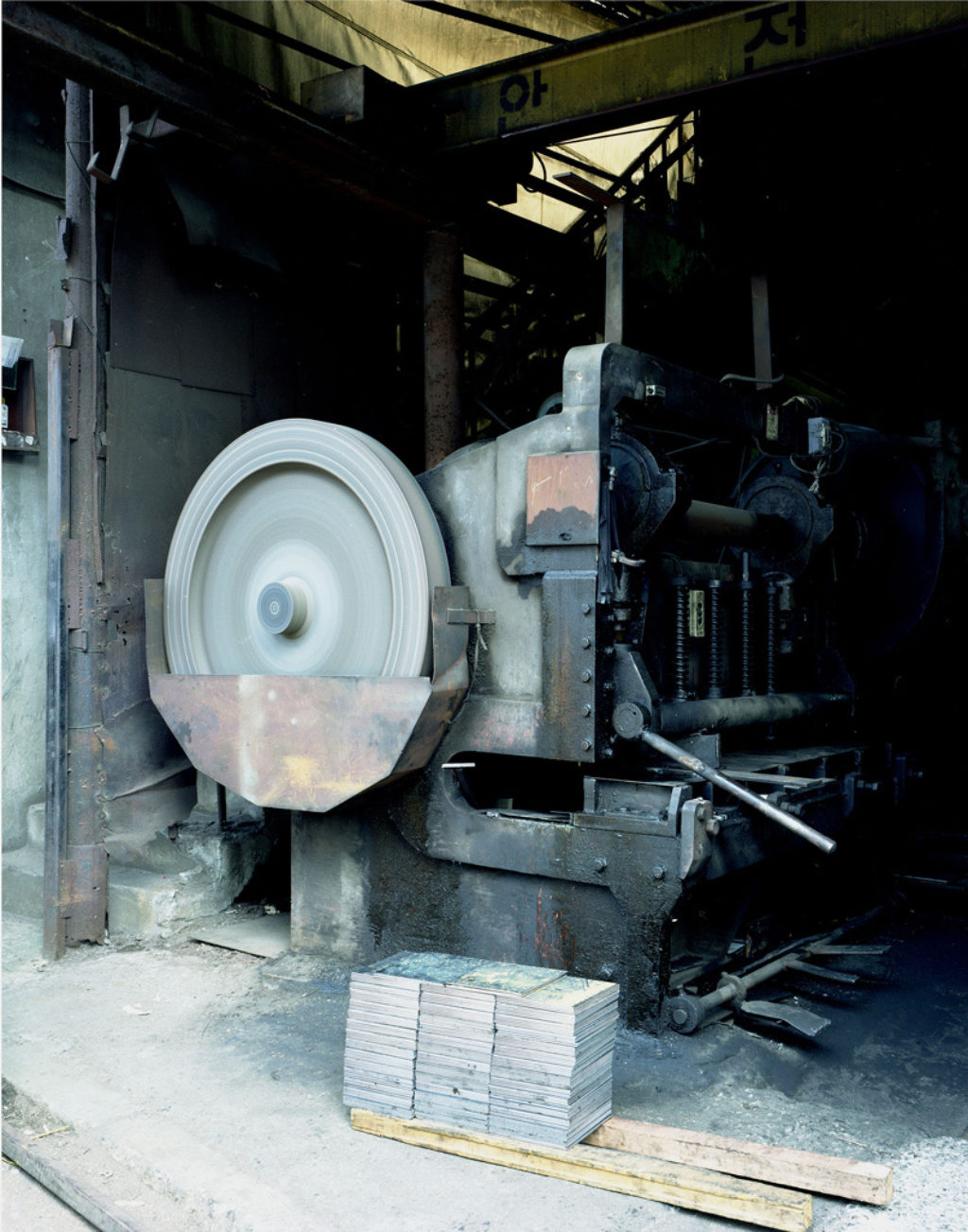 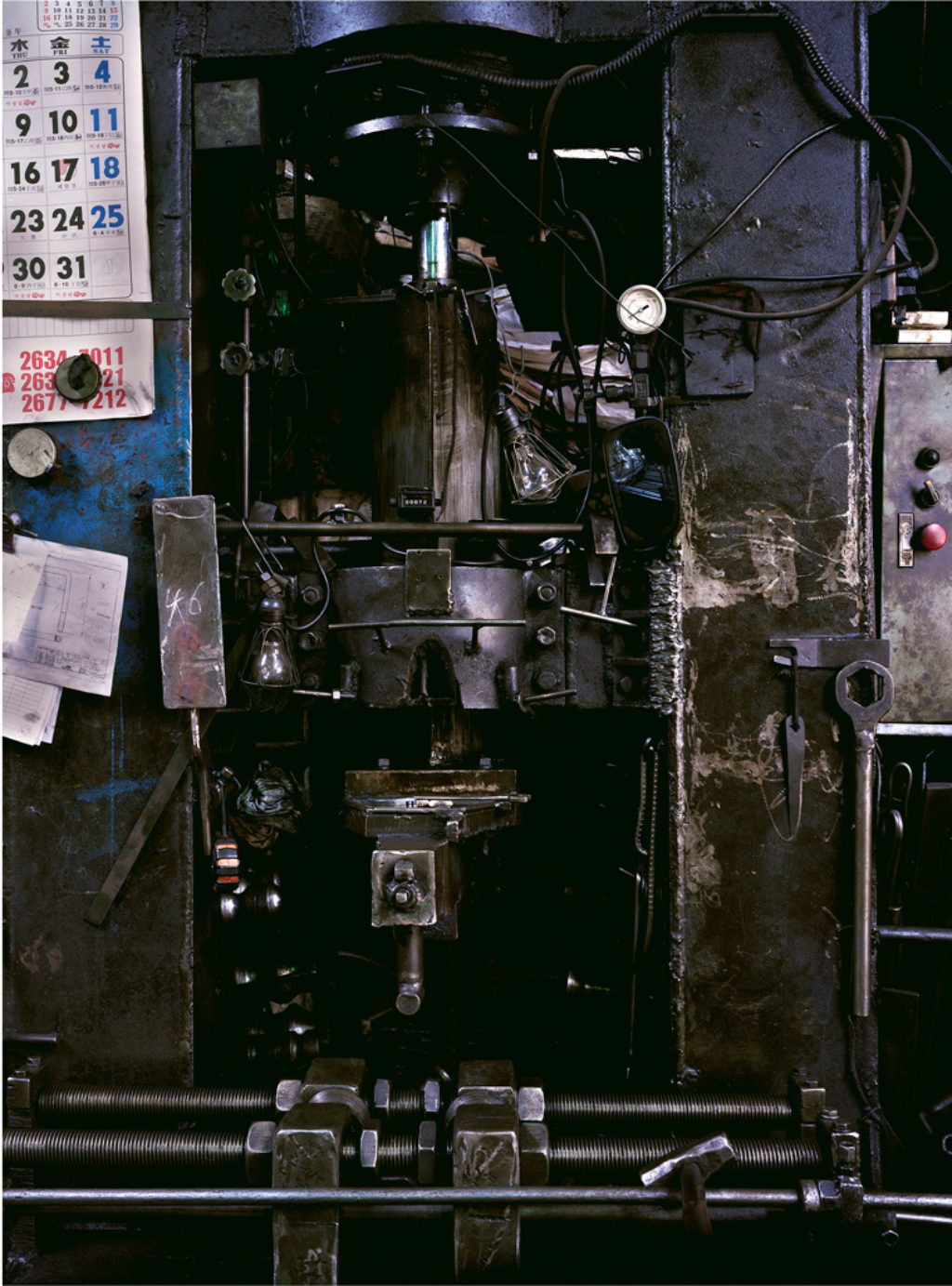 The work undertaken by Lovekin in Maardu in Estonia was initiated by a long held regard for Tarkovsky’s film Stalker. The two photographs from Maardu exhibited here, one a geometrical interpretation of a ruined industrial hall, the other a detail of found material on its floor, address entropy in its latter stages. The space of industry has slowly been reclaimed by nature – matter is returned to the ground. The grasses that line the concrete walls and the pools of algae soften the harsh lines of the concrete and steel framework. But it is not all material of weight: what at first appears to be a folded sheet of lead or other heavy metal in Maardu II turns out, on closer inspection, to be a discarded piece of lino or acrylic flooring, reminding us that industry is always supported and controlled by administration. The pathos of the now defunct bureaucracy of the former Soviet Union is evoked in this pathetic remnant. 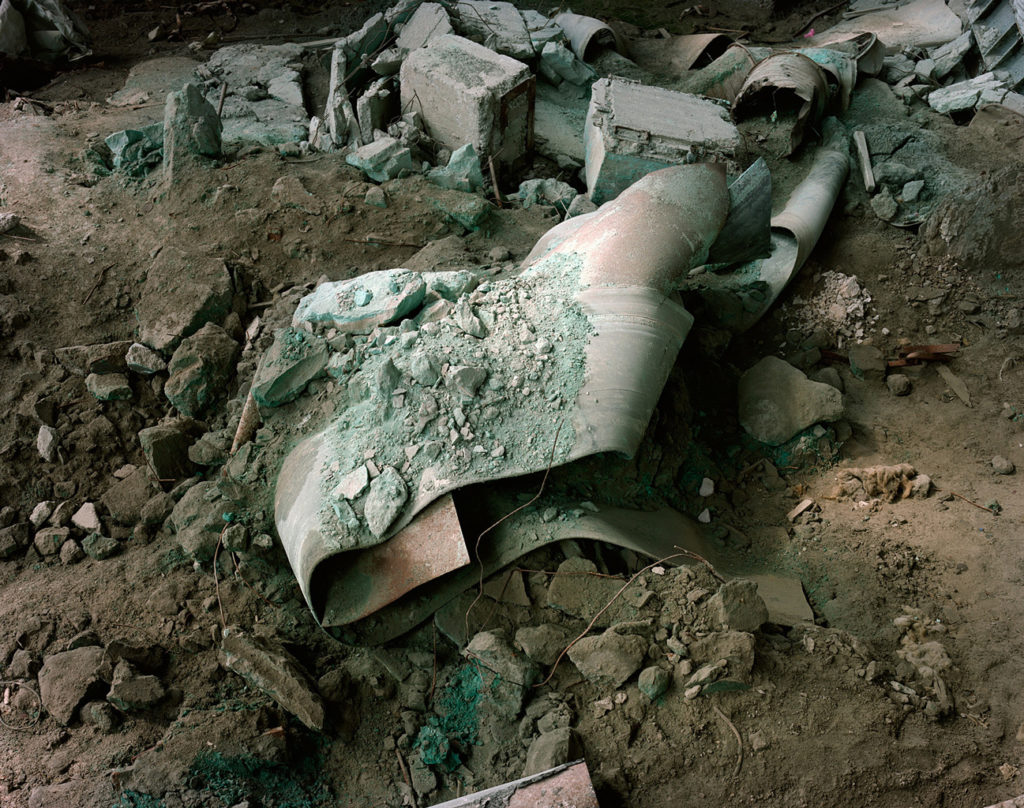 The final set of works, recently undertaken in the lagoons of Pialassa Della Baiona e Risega near Ravenna, are at once a lament for a disappearing world and the celebration of its resolve to exist in the luxurious qualities of winter light and water. There is an emphasis here on horizon. The fishing huts, masts and nets that appear clear and distinct in the upper half of the frame dissolve in the lower half, whilst the reflection of the clear skies intensify in hue and iridescence.

These twelve photographs, seen together are a testimony to fading worlds. Will they, we ask, be renewed or replaced by something better or is their and our slow decline into disorder somehow inevitable. Prophecy and calculation are futile, but Lovekin reminds us that we should hold them in wonder while our eyes can still perceive them. 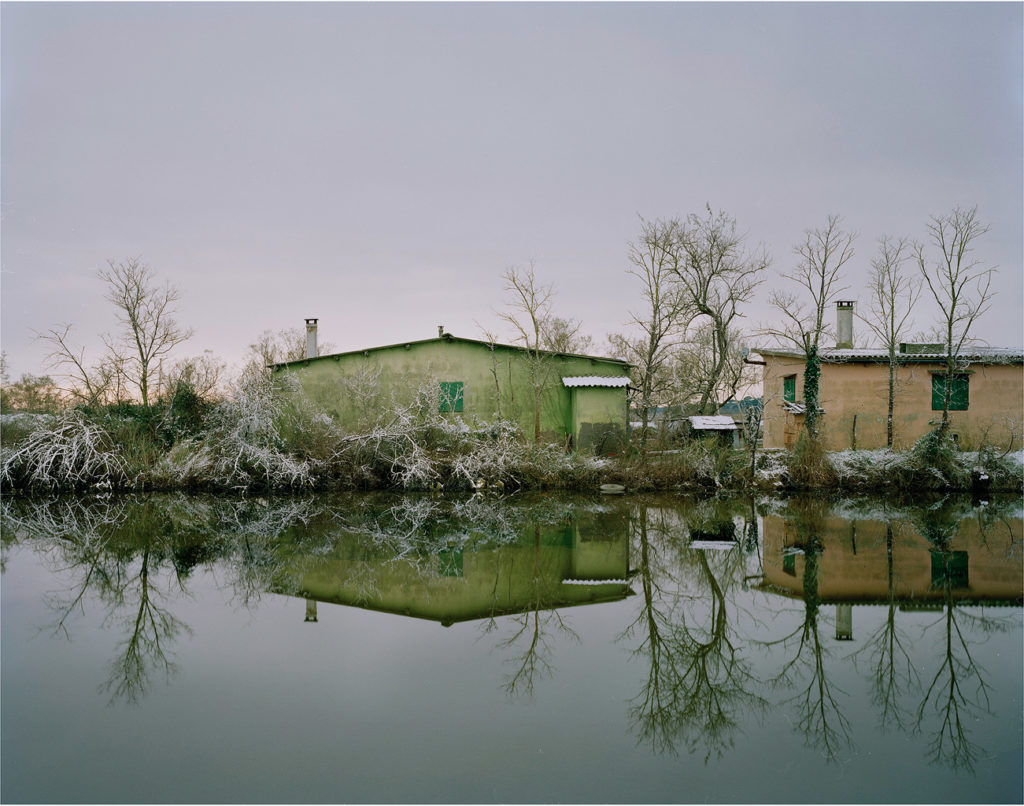 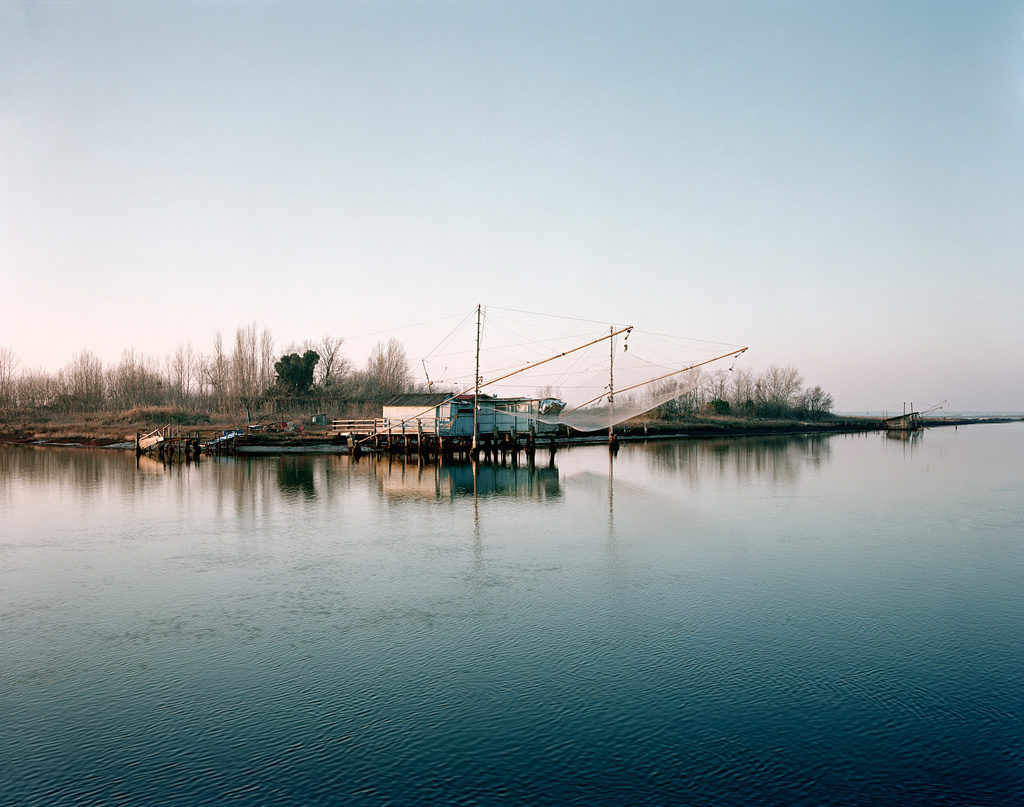